A brief explanation of the matter

This is because one good deed is written down as ten, and thus Ramadan is like ten months and six days is like two months, completing an entire year. Therefore, if one does this every year, it's as if one fasts one's entire life.'


[1] Ar. ad-dahr, which in the normal context of the ḥadīth means an entire year, but Imam Muṣṭafā al-Bughā will explain how it could mean an entire lifetime.
Posted by Mahdi Lock at 00:33 No comments: 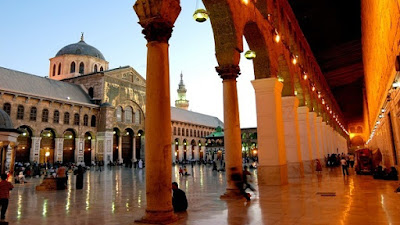 In the Name of Allah, the All-Merciful, the Most Merciful. May the peace, blessings and mercy of Allah be upon you. Is the obligation to pray the Jumuʿah prayer dropped if the first day of Eid is a Friday? Thank you very much and may you always be in a good state.

Answer (Imam Muḥammad Saʿīd Ramaḍān Al-Būṭī, may Allah have mercy on him):

The podcast of this article

The translation of the poem is:

Ramadan, how sweet was our short meeting
And how bitter it shall be the day we bid you farewell
Oh but for those nights
They passed by like a flash of lightning when it sparkles

And with Allah alone is every success.
Posted by Mahdi Lock at 06:36 No comments:

Podcast: The Messenger of Allah, may Allah bless him and grant him peace, in Ramadan (Part 2B)

Podcast on the second part of this article

Which is the second part of this podcast

Further Reading:
Part 1 of The Messenger of Allah, may Allah bless him and grant him peace, in Ramadan
Not Fasting Due To Illness
The Ruling on the Tarawih Prayer
The Book on the Adhkar of Fasting
Posted by Mahdi Lock at 20:07 No comments:

Podcast: The Messenger of Allah, may Allah bless him and grant him peace, in Ramadan (Part 2A)

Podcast on the first part of this article

Further Reading:
Part 1 of The Messenger of Allah, may Allah bless him and grant him peace, in Ramadan
The Book on the Adhkar of Fasting

Related Podcasts:
Part 1A
Part 1B