Not Fasting Due To Illness

What is the value of the kaffārah[1] for the person who has been prevented from fasting by his doctor for health reasons? How does he carry it out, when and to whom?

Whoever has to break his fast due to illness and it is hoped that he will recover, all he has to do is make them up when he is able.

Whoever has to break his fast due to an illness[2] from which he is not expected to recover has to donate the equivalent of approximately half a kilogramme of rice[3] for each missed day,[4] and when we say rice we mean the rice itself, not its monetary value.

[1] (tn): The word should actually be fidyah, which means redemption, while kaffārah is expiation. Please see this fatwā  and this article. Someone who misses fasts due to illness has not committed any sin, and thus fidyah should be regarded as an alternative means of worshipping one’s Lord.
[2] (tn): ‘those who are ill (N: the illness that permits not fasting being that which fasting would worsen, delay recovery from, or cause one considerable harm with; the same dispensation applying to someone who needs to take medicine during the day that breaks the fast and that he cannot delay taking until night.’ [Reliance of the Traveller (Beltsville, Maryland: Amana Publication, 1999), section i1.3(1), p.279]
[3] (tn): i.e. half a litre of food, which should be the staple crop of the country. Please see Reliance, section i1.33, p.290. According to Muʿjam Lughat al-Fuqahāʾ (Beirut: Dār Al-Nafāʾis, 1431/2010), s.v. Mudd, one mudd is equivalent to 0.543 kg, to be precise.
[4] (tn): i.e. to the poor

More Fatawa On Ramadan And Fasting
Posted by Mahdi Lock at 00:14 No comments:

My family and I live in Europe and the adhān for ʿIshāʾ is very late, around quarter past eleven. We’re very tired by that time and especially the children, who have to sleep early in order to wake up and get ready for school. It is permissible for us to combine the ʿIshāʾ prayer with the Maghrib prayer when the first prayer comes in,[1] which is at about ten minutes to nine? Or, do we have to wait for the ʿIshāʾ prayer, and if it is the case that we have to wait until ʿIshāʾ, it is permissible for the children, especially those who are under 14, to combine their prayers and sleep, and especially the ones who are used to sleeping early, i.e. before half past nine? Please let us know, and may Allah reward you.

Praise be to Allah, and He suffices, and peace be upon His Chosen Messenger.

Jamʿ al-taqdīm is not permissible unless one is travelling, and it is possible for the difference between Maghrib and ʿIshāʾ to be an hour and a half for people whose red horizon[2] never disappears, and this applies to every adult.[3]

[1] (tn): known as jam’ al-taqdīm, which would also apply to praying al-Ẓuhr and al-ʿAsr during the time for al-Ẓuhr. Jamʿ al-taʾkhīr, on the other hand, refers to delaying the first prayer and combining it with the second prayer during the second prayer’s time.
[2] (tn): Ar. al-shafaq al-aḥmar, i.e. evening  twilight, during which time there is red in the sky.  Please see http://www.spc.noaa.gov/publications/corfidi/sunset/, which is also the source for the image above. What the sheikh is saying, may Allah preserve him, is that it is not permissible to combine prayers merely because the second prayer is late. If there is indeed no disappearance of the redness in the sky, one can wait an hour and a half and then prayʿIshāʾ.
[3] (tn): Ar. bāligh, which, in the Revealed Law, is anyone who has reached puberty, indicated by a wet dream in the case of boys and menstruation or pregnancy in the case of girls. If none of these occur, then the child is deemed legally responsible (mukallaf) once he or she turns 15 lunar years of age. Please see Reliance of the Traveller (Beltsville, Maryland: Amana Publications, 1999), section k13.8, p. 411-412, which is in the Book of Trade.
Posted by Mahdi Lock at 14:07 No comments:

The Legal Ruling for the Tarāwīḥ Prayer

What is the legal ruling for the Tarāwīḥ prayer?

Aḥmad, Ibn Ḥibbān and Al-Ḥākim have related, and the latter declared it authentic (ṣaḥīḥ), from the ḥadīth of Abū Dharr, that the Messenger of Allah, may Allah bless him and grant him peace, said, “Prayer is the best of matters, so whoever is able to do a great deal of it let him do a great deal.”[1]

This clearly means that whenever a Muslim does a lot of supererogatory (nāfilah) prayers he gets more reward for doing so, and the Tarāwīḥ prayer is supererogatory. Therefore, whoever forbids someone praying from doing more than eight or ten or twenty [rakʿa] has gone against the speech of the Messenger of Allah. Indeed, he has declared it mistaken!

Indeed the debate that gets worse and worse in some masājid, regarding this issue, only exists for the sake of exalting one’s ego and defending one’s position, and whoever has devoted his attention to seeking Allah’s pleasure will never delve into this debate in the slightest. Let the person praying know that he is in charge of himself, and thus, if he wants to pray Tarāwīḥ as four, or eight, or twenty or more…then it is supererogatory, and the Messenger of Allah, may Allah bless him and grant him peace, has said, “Prayer is the best of matters, so whoever is able to do a great deal of it let him do a great deal.”

Taking Remuneration for Being an Imām 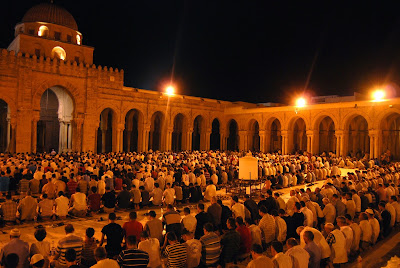 As-salāmu ʿalaykum wa Raḥmatullāhi wa Barakātuh. Is it permissible for one to take material remuneration (a monetary amount) in exchange for leading people in the Tarāwīḥ prayer? May Allah reward you a thousand times over and grant you a long life.

Praise be to Allah, and He suffices, and peace be upon His Chosen Messenger.

A wage in exchange for the prayer is not permissible but in exchange for one’s time, one’s travelling,[1] one’s devoting all their attention to a specific place and one’s remaining there, then there is no harm in it, especially if there are donations.[2] When people leave off these actions[3] the fuqahāʾ have given the fatwā that it is permissible due to necessity.[4]

[1] (tn): i.e. to the masjid where one will lead prayers, and in many cases imams travel to other cities and countries to lead people in prayer
[2] (tn): i.e. the congregation donates money to compensate the imām, and thus the masjid itself incurs no additional expense
[3] (tn): i.e. donating
[4] (tn): because there would then be the risk of no communal prayer

More Fatawa on Ramadan and Fasting
Posted by Mahdi Lock at 13:12 No comments:

Claims about the Unseen

2. Is it permissible to pray behind someone who says that whoever does not picture[1] the shaykh[2] during his wird[3] will be cut off from divine illuminations?

1. These claims and allegations are false. It is not lawful to make them, repeat them or believe in them. Lies like these are akin to lying against the Prophet, may Allah bless him and grant him peace, against the Revelation[4] and against Jibrīl, and the matter therein is spiritual;[5] no one has knowledge of it besides Allah, Mighty and Majestic.

2. This statement is false and is also not lawful in the Revealed Law. It is not permissible to picture a shaykh or anyone else whenever one is in prayer,[6] because a condition of the prayer is to be sincerely devoted to Allah, Mighty and Majestic, and the texts of the Qurʾān show the opposite of this, such as the Exalted One’s statement regarding idol-worshippers: “And those who take protectors besides Him – ‘We only worship them so that they may bring us closer to Allah’…” [Sūrat Al-Zumar 39:3] This kind of picturing is closer to idolatry,[7] and we seek refuge in Allah the Exalted.

[1] (tn): Ar. takhayyul, i.e. to picture him in one’s mind
[2] (tn): i.e. the leader of a Ṣūfī ṭarīqah
[3] (tn): a set of daily supplications and invocations, which in this case would be prescribed by the shaykh. For a general example, please see A Daily Wird.
[4] (tn): Ar. waḥī, which includes the Qurʾān and the Sunnah
[5] (tn): Ar. rūḥānī, i.e. immaterial and thus not something that can be witnessed and verified
[6] (tn): and the same applies to supplicating to Allah and invoking Him
[7] (tn): Ar. shirk
Posted by Mahdi Lock at 15:21 No comments: