How to Live a Saintly Life: The Life and Times of Abu Umar al-Maqdisi

A book review and discussion

Related podcast: What Is Tasawwuf?

Further reading: The 15th of Sha'ban
Posted by Mahdi Lock at 22:09 No comments:

Chapter Five: The Etiquettes of a Fatwā, the Muftī and the One Seeking a Fatwā

From Imam an-Nawawi's work, which will be republished soon, insha'Allah


Know that this chapter is very important. I wanted to give it precedence due to the general need for it, and a group of our companions[1] have already written about this, including:

Each one of them mentioned precious things that haven’t been mentioned by anyone else. I have studied the three books and extracted a brief summary that comprises every important matter that they mentioned and I have added to them some gems from the miscellaneous speech of our companions, and with Allah is every success.

Know that giving fatwā[2] is a matter of immense significance, formidable position and much precedence; because the muftī is the inheritor of the Prophets, may Allah’s prayers and peace be upon them, and he is carrying out a communal obligation, but he is liable to make mistakes. This is why they have said, ‘The muftī has a position with Allah the Exalted.’ We have related on the authority of Ibn al-Munkadir that he said, ‘The scholar is between Allah the Exalted and His creation, so look at how he enters between them.’ We have related on the authority of the first three generations and those who stand out from amongst the khalaf [3] many well-known statements regarding abstaining from giving fatwā, and we shall mention some of them in order to seek their blessings.[4] We have related on the authority of ʿAbd al-Raḥmān ibn Abī Laylā that he said, ‘I met one hundred and twenty of the Helpers[5] from the Companions of the Messenger of Allah, may Allah bless him and grant him peace. One of them was asked about an issue and he passed it on to someone else, and he in turn passed it on to someone else until it eventually came back to the first person.’ In another narration: ‘Not a single one of them would relate a ḥadīth except that he wished that his brother would spare him from having to do so, and none of them would be asked about something except that he wished his brother would spare him from having to give fatwā.

It is on the authority of Ibn Masʿūd and Ibn ʿAbbās, may Allah be pleased with them: ‘Whoever gives a fatwā regarding everything he is asked about is mad.’[6]

It is on the authority of Al-Shaʿbī, Al-Ḥasan and Abū Ḥaṣayn, who were Followers: ‘Indeed one of you will give fatwā regarding an issue, and if it were to reach ʿUmar ibn al-Khaṭṭāb, may Allah be pleased with him, he would gather the people of Badr against it.’

It is on the authority of Al-Shāfiʿī that he was asked about an issue and he didn’t answer. He was asked why and he replied, ‘Until I know whether it is better to remain silent or to give an answer.’

It is on the authority of Al-Athram: ‘I heard Aḥmad ibn Ḥanbal often saying ‘I don’t know’, and it is amongst the known saying and proverbs on the matter.’

It is on the authority of Al-Haytham ibn Jamīl: ‘I witnessed Mālik being asked about forty-eight issues, and regarding thirty-two of them he said, “I don’t know.”’

It is also on the authority of Mālik that he was maybe asked about fifty issues, and he didn’t answer a single one of them.’ He used to say, ‘Whoever gives an answer regarding an issue, before he answers he should place himself before Paradise and the Fire; how will he end up? Then he should answer.’ He was asked about an issue and said, ‘I don’t know.’ It was then said to him, ‘It’s a light, easy issue.’ He then became angry and said, ‘There is nothing light in knowledge.’

Al-Shāfiʿī said, ‘I never saw anyone in whom Allah the Exalted had gathered the tools of fatwā as he gathered them in Ibn ʿUyaynah who was more silent than him with regards to fatwā.’

Abū Ḥanīfah said, ‘If it were not for the fear from Allah the Exalted that knowledge would be lost I would not give fatwā; they get the delight[7] and I get the burden of responsibility.’ Their statements regarding this are many and well-known. Al-Ṣaymarī and Al-Khaṭīb said, ‘They are few those who are keen to give fatwā, racing towards it and applying themselves with zeal, except that they have little success and they are disturbed in their affairs even if they don’t like it, can’t influence it, and can’t find any alternative. If he changes his affair then the support from Allah is greater and propriety in his answers is greater, as proven by his statement, may Allah bless him and grant him peace, in the authentic ḥadīth: {Do not ask for rulership,[8] for indeed, if you are given it by way of asking you will be solely in charge of it, and if you are given it without asking you will be assisted with it.}[9]

Al-Khaṭīb said, ‘The Imam[10] should scrutinise the muftīs, and whoever is suitable for giving fatwā he should confirm and whoever is unsuitable he should prevent, and he should forbid him from going back and threaten to sanction him if he does go back. The way for the Imam to know who is suitable for fatwā is to ask the scholars of his time, and rely on the reports of those who are trustworthy from amongst them.’ Then he[11] related, with his own chain of transmission, on the authority of Mālik, may Allah have mercy on him, that he said, ‘I did not give fatwā until seventy people testified that I was qualified to do so.’ In another narration: ‘I did not give fatwā until I asked those who were more knowledgeable than me if they saw me as right to do so.’ Mālik said, ‘A man should not see himself as qualified for anything until he has asked those more knowledgeable than him.’

They have said, ‘The muftī should be outwardly careful and be well-known for his outward religiosity and dazzling prudence. Mālik, may Allah have mercy on him, would do more than what he had enjoined upon the people. He would say, ‘One is not a scholar until one does more oneself than what one enjoins upon the people, such that if he were to leave it off he would not be sinning.’ He would also narrate something similar from his sheikh Rabīʿah.

Do Good When You Are On Hajj

Imam Muhammad Mutawalli ash-Sha'rawi, may Allah have mercy on him, discusses Surat al-Baqarah 2:197, and in particular Allah's words: {...there must be no obscenity, no wrongdoing, nor any quarrelling during Hajj. Whatever of good you do, Allah knows it.}

Email ThisBlogThis!Share to TwitterShare to FacebookShare to Pinterest
Labels: Purification, The Foreword

By Imam Muhammad at-Taaweel, may Allah have mercy on him 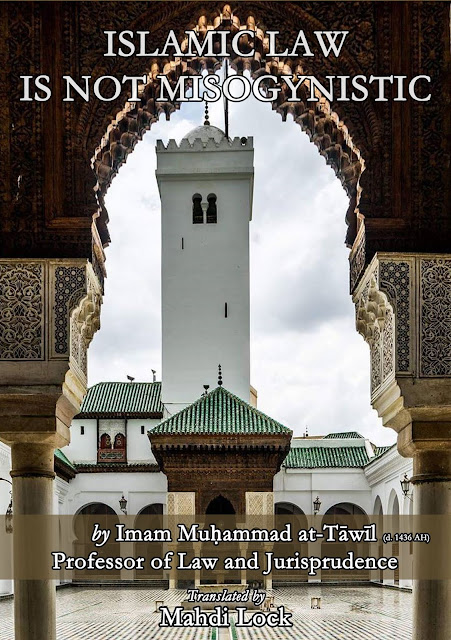 Some people have brought up the problem of “the masculinism of Islamic Law”, claiming that they are doing so in order for women to be defended and shown justice, and to clarify the injustice they have suffered as a result of legislations that have been influenced by the authority of men and their masculinism.

It is a baseless claim and a false statement the purpose of which is to defame our legal scholars and create misgivings about Islamic Law. In these pages, I have written some brief sentences that should benefit anyone eagerly looking for the truth, and should silence every hypocrite, those who are not pleased for men and women to live under the shade of Islam, happy with its divine legislations and laws.

And with Allah alone is every success.
Click here to order from Lulu.

UPDATE: The book is now available from Amazon.
The virtual book launch is available here.

By the Dawn and Ten Nights

Imam Muhammad Saeed Ramadan al-Bouti, may Allah have mercy on him, discusses the significance of these ten days

Further Reading:
Imam an-Nawawi on the Ten Days of Dhul Hijjah
Dhul Hijjah, the Day of 'Arafah and Fasting