Book Release: The Approach to Human Civilization in the Qurʾān

By Imam Muhammad Saeed Ramadan al-Bouti, may Allah have mercy on him 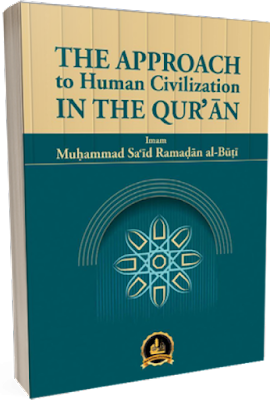 Alhamdulilah, the translation of Imam al-Bouti's book is now available from Jamalon and Neel wa Furat.

This book contains – perhaps for the first time – the study of a comprehensive Qurʾānic structure for a unique social education that can promote the establishment of a sound, stable civilizational rebirth.

It also contains – again for the first time – an inquiry into the foundations of knowledge and its point of departure in the Qurʾān, which most people have neglected until today. This book, with all of the above that it contains, is placed in front of those who say, ‘We have looked and we have not found a comprehensive educational theory in the Quran.’

A summary can be found here and an excerpt is available here.

As for regional bookshops and distributors, Nawa Books in Singapore has the book.

If you would like to stock or distribute the book in your region, please send me a message via the contact form on the right-hand side of this blog. If Dar al-Fikr do not have a distributor in your region, I can speak to them on your behalf, and with Allah alone is every success.


Insha'Allah, a virtual book launch will be available soon. A promo video is available here.

A Summary of the Rulings of Waqf (Part 4)

The fourth and final part of the Introduction to The Book of Waqf, to be republished soon, insha'Allah, which is a translation of p.490 to 491 of Sharḥ al-Yāqūt an-Nafīs


As for being disconnected in the middle, such as someone saying, ‘I have dedicated this house to Zayd and then a man – who is unspecified – and then to the poor, it is permissible, and when it is the turn of the unknown recipient they have said that it is spent on those nearest in kin to the endower, while another position is that it is spent on the poor.

If someone says, ‘I have dedicated this house to Zayd, ʿAmr and Bakr and then the masjid’, it is spent on the three.[2] If one of them dies, there is a difference of opinion regarding his share. Some of them have said that it is divided between the remaining two, and it is the relied-upon position, as long as the word ‘masjid’ is preceded by the conjunction ‘then’.[3] Another position is that the deceased’s share is transferred to the masjid.

An endowment is never sold, even if it is in a state of disrepair, as it is only permissible to rent it, except in a situation of compulsion, such as the state deciding to open a street and deciding to demolish the endowment because it is located in the area where the project is to be built. If the local authority pays compensation for the endowment then it is obligatory to take the compensation, and then one buys or builds something in place of it. Only the Ḥanbalīs allow for it to be replaced.[4]

The Ruling for Dedicating an Endowment to Oneself


It is not valid to dedicate an endowment to oneself, but they have said that if someone wants to dedicate something to himself then let him mention an attribute that is specific to him and no one else, such as him saying, ‘I have dedicated my house to the eldest of the family of so-and-so’ and he is the eldest of them; the endowment would be valid. This method is used by some people to prevent themselves from selling, but Imam Abū Ḥanīfah says that it is permissible to dedicate an endowment to oneself. While it is the opposite of the most correct position in the school of ash-Shāfiʿī, his proof is strong. He says, ‘If someone deserves something then it is an endowment, and if he doesn’t deserve it then it’s a case of ownership.’

And there are exceptions to the most correct position regarding the validity of dedicating an endowment to oneself, and they include bringing the idea before the ruler and the ruler regarding it as valid. Al-Khaṭīb stated this in al-Mughnī and it is acted upon today, because his ruling has not been nullified.

In the Ḥanbalī School it is valid to dedicate an endowment to oneself, and one must follow the proper procedures in the courts and registers. Abū Ḥanīfah allows for an endowment to be temporary, and then it becomes inheritance, and this is beautiful for whoever wants to do so.

The Shāfiʿīs have said that it is not allowed to replace anything from the furnishings or doors as long as they are fit for use, unless it is possible for them to be used in the same endowment, such as making them pieces of wood that can be used to cover the roof, in which case it would be permissible to change them.

In al-Minhāj:[5] ‘The most correct position is that it is permissible to sell the mats of the masjid if they have deteriorated and its columns if they are broken and only fit for burning.’

What’s strange is the words ‘if they have deteriorated’, because if they’ve reached that state, who will buy them?

Likewise, regarding replacing the old doors on an endowment for new ones, the jurists have said that is not allowed, because removing and pulling out the doors of masjids and putting other doors in their place while the original ones are still fit for use will deny the endower his reward for them, and this constrains the renewal and renovation of endowments.

If we wanted to install other doors that were harder, stronger, more solid and more beautiful, then why the prohibition? Even if we wanted to transfer the old doors to another endowment, such as from one masjid to another, they would say that it is not allowed, because they have been dedicated to this masjid.

However, Al-Sayyid ʿAlawī ibn ʿAbdullah Al-Saqqāf, when he rebuilt the masjid of Imam Ṭaha ibn ʿUmar Al-Saqqāf in Seiyun,[6] he transferred some of the old doors to other masjids, such as the masjid of Al-ʿAidrūs. He, i.e. Al-Sayyid ʿAlawī, is a great jurist, so he must have found a proof for that to be allowed.

If the doors are sold – according to the position of Imam Abū Ḥanīfah, we are subjected to another problem, because he says that the value is spent on the endower’s inheritors. The priority would be to spend it for the benefit of the masjid, if they consent to it. This is if they are limited in number. If they are not limited in number and it is not possible to include all of them, then it becomes clear that the money is spent in the same way that lost money is spent.[7]

An Illustration of an Endowment[8]

[8] One writes in the form of the endowment, ‘All praise be to Allah. To proceed: Zayd has dedicated and retained his well-known house for the benefit of the poor, and it is a valid, everlasting endowment that it not be sold, given as collateral, taken ownership of [because now it belongs to Allah], transferred or replaced. It is a valid endowment in the Revealed Law and it fulfills all the legally considered conditions. He has begun by looking at himself [i.e. to be responsible for it] and then the most mature of his children and then their children, and this is how things shall remain forevermore as long as he has progeny.’ Then one writes the date.
Posted by Mahdi Lock at 16:05 No comments:

Whoever of You is Capable of Al-Bāʾat, Let Him Get Married

What does al-bāʾat mean? Imam an-Nawawī, may Allah have mercy on him, explains 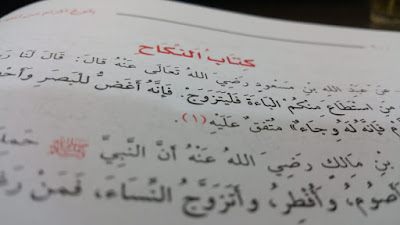 It is on the authority of ʿAbdullah ibn Masʿūd, may Allah be pleased with him, who said, ‘The Messenger of Allah, may Allah bless him and grant him peace, said to us, {O gathering[1] of youth![2] Whoever of you is capable of al-bāʾat, let him get married, for it lowers the gaze and protects the private parts. Whoever is not able to must fast, for it will cut his desire.}’[3] Agreed upon.[4]

Imam an-Nawawī: [5] The people of language have said that a maʿshar is a group of people who are included under one attribute, and thus the youth (ash-shabāb) are a maʿshar, the elderly (ash-shuyūkh) are a maʿshar, the Prophets are a maʿshar, women are a maʿshar, and so on and so forth. Ash-Shabāb is the plural of shāb, and other plurals include shubān, shababah and ash-shāb according to our companions,[6] and it is someone who is an adult[7] but has not passed thirty years of age.

As for al-bāʾat, al-Qāḍī ʿIyāḍ[8] has mentioned four ways of saying it. The well-known, eloquent way is al-bāʾat,[9] with an extension (madd)[10] and hāʾ[11] at the end. The second is al-bāt,[12] with no extension. The third is al-bāʾ[13] with an extension and the fourth is al-bāhah[14] with two hāʾ at and no extension. Its original meaning in the language is sexual intercourse and it is derived from the word al-mubāʾat, which is a residence, and from that we have the expression mubāʾat al-ibl (camel), i.e. where it lives. Then a marriage contract was called a bāʾat because when a man marries a woman, he gives her somewhere to live. The scholars have differed as to what al-bāʾat means here, and there are two positions that go back to one meaning:

The more correct position is that what is meant here is its linguistic meaning, which is sexual intercourse, and thus, what is implied here is that whoever of you is capable of sexual intercourse due to his ability to provide for it, which is to provide for a marriage, let him get married. Whoever is not capable of sexual intercourse due to his inability to provide for it must fast in order to ward off his passions and cut off his evil desires, just as al-wijāʾ[15] cuts it off. According to this position, this address was given to young men who were presumed to be desiring women and were not separating themselves from them most of the time.

The second position is that what is meant by al-bāʾat here is the provisions of marriage, and it is called by that which accompanies it. The implication is that whoever is capable of the provisions of marriage let him get married. Whoever is not capable let him fast in order to ward off his desires. Those who hold this position were prompted to do so because of his statement, may Allah bless him and grant him peace, {Whoever is not able to must fast.} They said, ‘The one who is incapable of sexual intercourse does not need to fast in order to ward off his desires. Thus, al-bāʾat must be interpreted to mean provisions.’ The former group respond with what we have already mentioned in the position above, which is that the implication is that whoever is incapable of sexual intercourse due to his inability to provide for it while being in need of sexual intercourse must fast, and Allah knows best.

As for al-wijāʾ, it is to crush the testicles, and what is meant here is that fasting cuts passions and cuts evil desires just as al-wijāʾ does.