A Look at Forced Marriages and Honour Killings

A selection of documentaries on the topic:

These documentaries are being posted to provoke discussion on the topic, obviously, but also to get to the heart of the matter. If a mentality of fiercely protecting "honour" is causing so many deaths and other forms of abuse, then it is not surprising that the same mentality attempts to cover up or at least trivialise what is going on. Therefore, while watching these documentaries, one should not only ponder on the facts of these events but also the reactions of members of the Asian community as they attempt to label these crimes as isolated incidents or request that the police not associate community leaders or local masjid committee members with them. This is very similar to what psychologists call enabling in the negative sense.

As for Nosheen, may Allah rectify her affair and cure her, it's hard to feel sorry for her father. What does he mean when he says she is "wasted"?

However, the most fascinating piece of information from both documentaries is the admission of Det. Const. Palbinder Singh regarding the notion that family honour can be regained through violence (about ten minutes into the second documentary):

In closing, it should be noted that this is only one aspect of the abuse and violation that Asian women, in particular, suffer, but forced marriage is at the root of it, from which honour killings, acid throwing, false imprisonment, kidnapping, sexual assault and so forth arise, and then affect the wider community, e.g. grooming.

And with Allah is every success and may Allah release or give a speedy rescue to all women who are in this horrific and grotesque situation, ameen!

The Glorious Legislation of Endowments 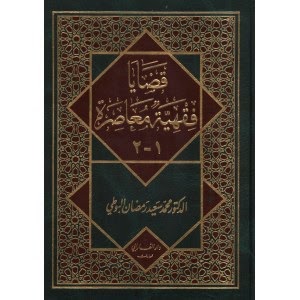 Alhamdulilah, Imam Muhammad Saeed Ramadan al-Bouti's, may Allah have mercy on him, article on how to revive endowments, or awqaaf, is now available from the Naseem al-Sham English site. The Arabic text can be located here and it was originally published in the Imam's book k Qaḍāyā Fiqhiyyah Muʿāṣirah (Damascus: Dār al-Fārābī, 2009). The translation will also be published in a forthcoming book on endowments, insha'Allah.

Is it permissible for elderly people as well as those who are pregnant and breastfeeding not to fast in Ramaḍān and what are they obliged to do in terms of qaḍāʾ[1] and fidyah?[2]

It is permissible for elderly people not to fast in Ramaḍān, due to the Exalted’s statement: “…For those who are able (yuṭīquna)[3] to fast, their fidyah is to feed the poor.” [Sūrat al-Baqarah 2:184]

Ibn ʿAbbās said about this āyah, in what has been related by al-Bukhārī: ‘It is not abrogated. It is referring to elderly men and women who are not able to fast, and thus in place of each day they feed a poor person.’[4]

Those who are pregnant or breastfeeding can also be excused from fasting in Ramaḍān based on what has been related by the five (i.e. Imam Aḥmad and the authors of the four Sunan collections)[5] on the authority of Anas ibn Mālik al-Kaʿbī, that the Messenger of Allah, may Allah bless him and grant him peace, “Indeed Allah, Mighty and Majestic, has removed the burden of fasting from the traveller and allowed him to shorten his prayer, and He has removed the burden of fasting from those who are pregnant and breastfeeding.”

As for what is obligatory upon those who are pregnant and breastfeeding, they have to make up the days they missed and they can choose short days in the winter to do so, but do they have to pay a fidyah? They don’t have to, except that the Shāfiʿī’s have declared fidyah to be obligatory along with qaḍāʾ if the one pregnant or breastfeeding fears for the child. If she fears for herself in terms of exhaustion or falling into difficulty, then fidyah is not obligatory upon her.[6]

[Translated from Fatāwā Muʿāṣirah (Damascus: Dār al-Fikr, 2003), p.30-31]
[1] (tn): i.e. making up the fast
[2] (tn): i.e. redemption, which is not the same as a kaffārah, which means expiation; a person in this situation has not sinned and is thus merely looking to compensate for missing out on worship as opposed to expiating a sin they have committed
[3] (tn): The meaning is those who are able to fast but with great difficulty, as the word ṭāqah means the ability to do something but with difficulty and hardship. Please see Ṣafwat al-Tafāsīr by Sheikh ʿAlī as-Ṣābūnī (Beirut: Dār al-Fikr, 1421/2001) v.1, p.108-109
[4] (tn): which should be approximately half a kilogramme of rice for every missed day; please see this fatwā for further details
[5] (tn): These are Imams Abū Dāwūd, an-Nasāʾī, at-Tirmidhī and Ibn Mājah. Please see the introduction to Bulūgh al-Marām by Imam Ibn Ḥajar al-ʿAsqalānī (Al-Manṣūrah: Dar al-Ghad al-Gadeed,  1426/2005), p.11
[6] (tn): There is a slight difference of opinion here, as demonstrated by Sheikh Muṣṭafā al-Bughā in his commentary on ʿUmdat as-Sālik wa ʿUddat an-Nāsik , entitled Tanwīr al-Masālik (Damascus: Dār al-Muṣṭafā, 1431/2010). He states that a pregnant or breastfeeding woman must pay a fidyah and make it up if she fears for her child, regardless of whether she fears for the child alone or the child as well as herself (v.1, p.509).  The dominant position is that a distinction is made between not fasting out of fear for the child alone and not fasting out of fear for the child and oneself, and thus if one fears for only the child then fidyah is obligatory along with qaḍāʾ, but if one fears for the child and oneself then only qaḍāʾ is obligatory. Please see at-Taqrīrāt as-Saḍīdah fī Masāʾil Mufīdah: Qism al-ʿIbādāt by Sheikh Ḥasan al-Kāf (Tarīm: Dār al-Mīrāth an-Nabawī, n.d.) p.455-456.

More Fatawa on Ramadan and Fasting
Posted by Mahdi Lock at 00:52 No comments: