The Rank of Knowledge and Scholars

A translated clip from this video

By Imam Abdul Haleem Mahmood, by Allah have mercy on him

Related Post:
Can a Muslim be a Communist?
Posted by Mahdi Lock at 13:22 No comments:

Email ThisBlogThis!Share to TwitterShare to FacebookShare to Pinterest
Labels: Advice, Arabic, The Foreword 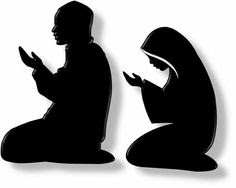 The Definition of Family:

The word usrah (i.e. family) linguistically means ‘a group of people’ (rahṭ), i.e. individuals – the people closest to you.

In Islamic terminology, usrah means that cell that includes fathers, mothers, grandfathers, grandmothers, daughters, sons and the sons of sons.

The Family is the Foundational Pillar of Society:

If the individual is the foundational brick in the building of society, the family is the living cell in its essence.

The individual is a part of the family and draws his primary characteristics from it. The Exalted One has said, “…descendants one of the other…” [Āl ʿImrān 3:34] He is imprinted with its imprint and influenced by its upbringing and nurturing.

The Messenger of Allah, may Allah bless him and grant him peace, said, {There is no child except that it is born upon the natural disposition (al-fiṭrah). Its parents then make him a Jew, Christian or Magian, just as an animal produces an entire animal. Have you ever noticed one that is mutilated (jadʿāʾ)?} This has been related by Muslim (in the Book of Predestination in the chapter on the meaning of every child being born upon the natural disposition…, no.2658) on the authority of Abū Hurayrah.

The fiṭrah is the state that has been prepared for good, and it is the original human disposition. ‘…just as an animal produces an entire animal…’ means that it is just as an animal gives to birth to offspring that has all of its limbs and organs and nothing is missing.

Jadʿāʾ means that an ear has been cut off. In other words, mutilation and imperfection occur after birth, due to the influence of the environment that surrounds a person, as well as others. Man’s state is the same; his uprightness or deviation is subject to the environment that he grows up and develops in.

This is why Islam goes to great lengths to protect the family, why it devotes so much concern to it and why the family takes up a large share of the rulings found in the Qurʾān and in the Sunnah.

The Ways in which Islam Shows Concern for the Family:

The ways in which Islam shows concern for the family are manifest in the legislations and rulings that it has formulated in order to organise the family and regulate its affairs. These include, and are not limited to, to the following:

A. The command to marriage:

This is so that the pillars of the family can be established, because there is no family without marriage. Any sexual relationship between a man and a woman that is not based on the foundations of marriage is adultery and fornication.

Allah the Exalted says, “And do not go near fornication. It is an indecent act, an evil way.” [al-Isrāʾ 17:32]

He, Mighty and Majestic, also says, “…in marriage, not in fornication or taking them as lovers.” [al-Māʾidah 5:5]

B. The legislation of the rights and duties of both the husband and wife:

Islam has placed the following duties upon the husband towards the wife:

2. Maintenance (nafaqah); the Exalted One has said, “It is the duty of the fathers to feed and clothe them with correctness and courtesy.” [al-Baqarah 2:233]

Likewise, the wife is obligated to carry out the following with regards to the husband:

1. Obedience in that which is not disobedience to Allah. The Exalted One has said, “Men have charge (qawāmah) of women.” [an-Nisāʾ 4:34]

Qawāmah means leadership and the right to be obeyed.

2. That no one enters his house without his permission and consent; the Messenger of Allah, may Allah bless him and grant him peace, said, {It is your right over them that no one whom you dislike enters your house.}

Imam an-Nawawī, may Allah the Exalted have mercy on him, said, ‘They cannot allow anyone you dislike to enter your houses and sit in your homes.’

3. That they preserve his dignity, maintain his honour and protect his wealth; the Messenger of Allah, may Allah bless him and grant him peace, said, {Shall I tell you the best that a man gathers for himself? A righteous wife; when he looks at her, it pleases him, when he commands her, she obeys him, and when he is absent, she protects his honour and his wealth.} This has been related by Abū Dāwūd (in the Book of Zakāt in the chapter on the rights of wealth, no. 1664).

C. The legislation of the rights of children and parents:

Islam has placed the following obligations upon parents with regards to their children:

1. Maintenance; Allah the Exalted has said, “If they are suckling for you, give them their wages.” [at-Ṭalāq 66:6] Allah, Mighty and Majestic, has obligated a wage for the one suckling for the sake of the child’s maintenance.

2. Good upbringing and teaching them how to worship and have good character; the Messenger of Allah, may Allah bless him and grant him peace, has said, {Teach your children to have three qualities: love for their Prophet, love for his household and the recitation of the Qurʾān.} This has been related by ad-Daylamī (See al-Jāmiʿ as-Saghīr by as-Suyūṭī).

Likewise, Islam has placed the following obligations upon children:

1. Obedience to parents in that which is not disobedience to Allah the Exalted, and to show them kindness:

The Exalted one has also said, “Keep company with them correctly and courteously in this world.” [Luqmān 31:15]

2. Maintenance of the parents if they are poor and the child is wealthy; the Messenger of Allah, may Allah bless him and grant him peace, said, {From the purest of that which a man eats is what comes from his own earnings, and his child is from his earnings.} He, may Allah bless him and grant him peace, also said, {You and your wealth belong to your father. Your children are from the purest of your earnings, so eat from the earnings of your children.} (Abū Dāwūd in the Book of Houses and Renting in the chapter on a man who eats from the wealth of his father, no.3528 and 3530, at-Tirmidhī in the Chapters of Rulings, in the chapter on what has reached us regarding a father eating from his son’s wealth, no.1358)

And there are many other rulings connected to the organisation of family life and the regulation of its affairs, and from these rulings and legislations the extent to which Islam is concerned with the family and protecting it is made clear.

Can a Muslim be a Communist?

One day, Brother Muḥammad ʿAbdur Raḥmān came to see me, and he works in journalism. He started talking with me about a number of issues and I started answering him, and this is something we normally do from time to time.

Amongst these questions was a question about communism. The full text of the question and the answer to it is as follows:

Question: Is it possible for me to be a Muslim and a communist? Why?

Answer: A sincere Muslim’s Islam means that he doesn’t need any other doctrine. Allah, Glorified and Exalted is He, has made this unequivocally clear:

Allah has completed and perfected the theology of this religion.

At first, he said, ‘Religion must be removed from society.’ When it was said to him, ‘Man must have a belief. What alternative is there to the belief in God?’, he said, ‘Distract them with theatre, and have a lot of theatre. Whenever you have a lot of theatre, the people start talking about the play’s success or failure, about the success or failure of the actors and actresses in their roles, and they forget about religious beliefs.’

He is the one who said, ‘Religion is the opium of the masses.’

The other leaders of communism have made similar statements. Even if they are not word for word the meaning is the same. All of them agree on this and their actions absolutely corroborate it. The most atheistic and the most anti-religion of them is the one who advances through the party ranks and becomes a leader.

The communists have a specific way of attacking religion.

The first step in attacking religion is to make fun of its scholars, to mock them and criticize them, and they attack them with every means: caricatures, plays, films, jokes.

The initial plan is to weaken the scholars of religion with every means.

They inflate that which is small, they bring into existence that which doesn’t exist and they constantly spread rumours.

They study these stages of theirs patiently. They have a set plan for each step, with written talking points and many things prepared in advance. This is as far as belief goes.

The actual foundation of Islam is the freedom of the individual in relation to wealth, within the framework of the general principles of Islam.

If the foundation in Islam is the freedom of the individual in relation to wealth within the framework of Islam’s general principles, then communism vehemently opposes it.

Seeing the Messenger of Allah, may Allah bless him and grant him peace, whilst awake

What Imam Muḥammad Saʿīd Ramaḍān al-Būṭī, may Allah have mercy on him, said on the matter, contrary to certain claims 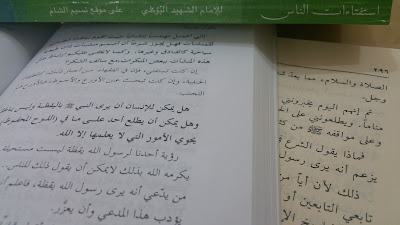 Is it possible for a person to see the Prophet, may Allah bless him and grant him peace, whilst awake as opposed to in a dream? And is it possible for someone to be shown what is on the Preserved Tablet (al-Lawḥ al-Maḥfūẓ), which contains matters that only Allah knows?

2. Fatwa from the Naseem al-Sham site:

In the Name of Allah, the All Merciful, the Most Merciful:

My question is for the distinguished Dr Muḥammad Saʿīd Ramaḍān al-Būṭī.

My dear respected sir, I heard a cassette from a Sufi scholar whose piety (taqwā), carefulness (waraʿ) and knowledge I trust that there are those who see the Messenger of Allah, may Allah bless him and grant him peace, openly, and as evidence for the legitimacy of this he cited the book Tanwīr al-Ḥalak fī Jawāz Ruʿyat an-Nabī wa al-Malak by Imam as-Suyūṭī, may Allah have mercy on him. I have also read on some websites that there are others who are repelled by this position and say that it contradicts the correct theology. What is your opinion on the matter?


3. The statement from his commentary on the Ḥikam of Imam ibn ʿAṭāʾillah:

Then there are those today who tell me that their shaykhs have seen the Messenger of Allah, may Allah have mercy on him, whilst awake, not sleeping. They tell me about conversations that take place between them and the Messenger of Allah and about his positions regarding many contemporary events and problems.

And we do not use what we know about the history of the righteous First Three Generations as evidence that seeing the Messenger of Allah whilst awake is impossible. We seek refuge in Allah. The Messenger of Allah is alive and enjoying his life in the barzakh, which is distinct from the lives of the pious and the righteous, and the possibility of seeing the people of the barzakh is rationally established.

However, something being rationally possible is one thing and claiming that it has actually happened is something else.

Related:
A full explanation of the matter and defence of Imam al-Bouti, may Allah have mercy on him