Why? Creed does matter. (Our Failure is Our Loss 5)

I kindly invite all of you to read the latest article at www.htspub.com. It deals with an extremely important and relevant topic of discussion.

It is indeed very sad to see 'community leaders' amongst Ahl us-Sunnah wa'l Jama'ah telling believers that all they need to know is the six pillars of faith, as recorded in the first hadith in Sahih Muslim, and that everything beyond that is not necessary.

We then have to ask this question. If we mitigate the importance of creed then how is it possible for orthodox believers to know more about Allah and thereby draw closer to Him? If the promise of salvation by faith alone, i.e. that Allah wants to have a relationship with humanity and He has promised that He will never turn away from them (see Al-Baqarah 2:256 for one example) then how can the believers be expected to strive and struggle to seek His pleasure? What about the promise of seeing Him (Al-Qiyaamah 75:22-23 and Yunus 10:26)? These are massively important creedal points that need to be at the forefront of the minds of believers.

We need to constantly be thinking of what Allah has done for us, continues to do for us, and what He still has in store for us. Why should the teaching and preaching of salvation, especially, and the doctrine of seeing Allah in the Hereafter be played down, or even ignored, for the sake of not offending the people of innovation? This is nothing short of treachery towards the common believer.

It is also sad that amongst Ahl us-Sunnah we have scholars who have decided to re-interpret the ahadith regarding the division of the Ummah into 73 sects by saying that the saved sect is the entire Ummah, i.e. Ahl us-Sunnah and the people of innovation and heresy, while the 72 other sects are the Jews and Christians. This was never said by the first three generations or even those who came after, so it is an interpretation that is to be rejected absolutely. Even Shaikh Abdul Qadir Al-Jilani, of whom so many people nowadys claim affiliation, states that the saved sect (al-firqatu an-najiyyah) is Ahl us-Sunnah wa'l Jama'ah (Al-Ghunya p.143) and then goes on to discuss and describe the remaining 72 sects in quite some detail. They are not the Jews and the Christians. One may also refer to classical works on heresiography such as Kitab As-Shari'ah by Imam Abu Bakr Al-Aajuri and Al-Milal wa An-Nihal by Imam ash-Shahrastani.

With Allah alone is every success. As a layman I can only advise believers to take their deen seriously and to learn Arabic at any and every opportunity. Don't let anyone, regardless of their intention, take you for a ride and waste your time because they don't want to offend some individual or organisation. It is your right to know who the standard bearers of this Deen are and to know what they have said. Even more so, it is your right to know who Allah is and what He has promised you, and with that you can draw closer to Him. (see Al-Baqarah 2:186)

Mahdi
Posted by Mahdi Lock at 20:31 No comments:

No barbed wire...it might hurt the thieves, allotment holders told

A gardener who fenced off his allotment with barbed wire after being targeted by thieves has been ordered to take it down – in case intruders scratch themselves.

Bill Malcolm erected the 3ft fence after thieves struck three times in just four months, stealing tools worth around £300 from his shed and ransacking his vegetable patch.

But Bromsgrove district council has ordered the 61-year-old to remove the waist-high fence on health and safety grounds. 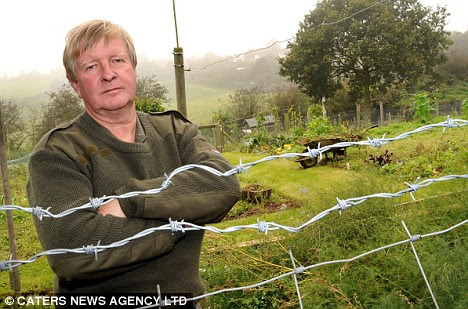 Demoralised: Bill Malcolm and his fence

Mr Malcolm, who has grown potatoes, onions, beetroot and asparagus on two patches at the Round Hill allotments in Marlbrook, Worcestershire, for the past eight years, said: 'It's an absolutely ridiculous situation.


'All I wanted was to protect my property but the wire had to go in case a thief scratched himself.


'The fence was just a single strand and ringing my property. It was only 3ft high – it wasn't as though I'd dug a moat filled with piranha fish and erected 6ft iron railings.

'The council said they were unhappy about the precautions I had made but my response was to tell them that only someone climbing over on to my allotment could possibly hurt themselves. 'They shouldn't be trespassing in the first place but the council apologised and said they didn't want to be sued by a wounded thief.


'I told them to let the thief sue me so at least that way I would know who was breaking into my allotment but everything I said fell on deaf ears. It seems as though they are so wrapped up in red tape, they are unable to help me.'


Mr Malcolm said he had been robbed three times since June, along with around 16 of the 50 allotment keepers on the site.


'About £300 worth of tools were taken, including everything from a stainless steel border spade and pitchforks to screwdrivers and hammers,' he added. 'The thieves cut through steel locks on the shed, or broke in through the windows. I caught one lad of about 16 red-handed.


'He dropped the bag of tools and fled, but although the police took a description and finger prints, I heard nothing. Another time yobs broke in and completely trashed my potato and vegetable patches.


'A lot of people, myself included, are growing our own veg to beat the credit crunch. But what's the point if they are going to be ripped up by mindless idiots?


'I take care of this allotment but it's very demoralising to have your belongings stolen and your hard work ruined.'


A spokesman for Bromsgrove council said: 'With regard to the barbed wire, when this is identified on site, we are obliged to request its removal or remove it on health and safety grounds.'


Sergeant Nick Husbands, of West Mercia Police, said: 'We can confirm that five thefts from Round Hill allotments have been reported in the past year.


'These have mainly been from sheds and our advice to allotment holders is not to leave anything of value there.'


Mr Malcolm's plight comes just weeks after Bristol council angered allotment holders by urging them not to lock their sheds in case burglars damaged them breaking in.