Friedrich Nietzsche on Islam and Christianity 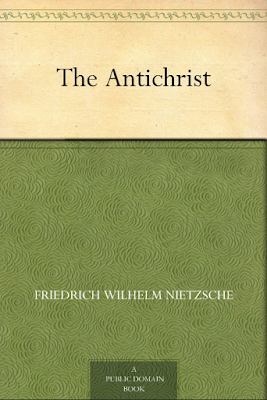 The German philosopher Friedrich Nietszche wrote The Anti-Christ in 1888; a scathing polemic against Christianity, and he mentioned some interesting things about Islam in the process. The online version can be accessed here.

"One needs but read any of the Christian agitators, for example, St. Augustine, in order to realize, in order to smell, what filthy fellows came to the top. It would be an error, however, to assume that there was any lack of understanding in the leaders of the Christian movement:--ah, but they were clever, clever to the point of holiness, these fathers of the church! What they lacked was something quite different. Nature neglected--perhaps forgot--to give them even the most modest endowment of respectable, of upright, of cleanly instincts. . . Between ourselves, they are not even men. . . . If Islam despises Christianity, it has a thousandfold right to do so: Islam at least assumes that it is dealing with men. . . ."

And then there's Chapter 60:

"Christianity destroyed for us the whole harvest of ancient civilization, and later it also destroyed for us the whole harvest of Mohammedan civilization. The wonderful culture of the Moors in Spain, which was fundamentally nearer to us and appealed more to our senses and tastes than that of Rome and Greece, was trampled down (--I do not say by what sort of feet--) Why? Because it had to thank noble and manly instincts for its origin--because it said yes to life, even to the rare and refined luxuriousness of Moorish life! . . . The crusaders later made war on something before which it would have been more fitting for them to have grovelled in the dust--a civilization beside which even that of our nineteenth century seems very poor and very "senile."--What they wanted, of course, was booty: the orient was rich. . . . Let us put aside our prejudices! The crusades were a higher form of piracy, nothing more! The German nobility, which is fundamentally a Viking nobility, was in its element there: the church knew only too well how the German nobility was to be won . . . The German noble, always the "Swiss guard" of the church, always in the service of every bad instinct of the church--but well paid. . . Consider the fact that it is precisely the aid of German swords and German blood and valour that has enabled the church to carry through its war to the death upon everything noble on earth! At this point a host of painful questions suggest themselves. The German nobility stands outside the history of the higher civilization: the reason is obvious. . . Christianity, alcohol--the two great means of corruption. . . . Intrinsically there should be no more choice between Islam and Christianity than there is between an Arab and a Jew. The decision is already reached; nobody remains at liberty to choose here. Either a man is a Chandala or he is not. . . . "War to the knife with Rome! Peace and friendship with Islam!": this was the feeling, this was the act, of that great free spirit, that genius among German emperors, Frederick II. What! must a German first be a genius, a free spirit, before he can feel decently? I can't make out how a German could ever feel Christian. . . ."

For more information on the history of the crusades, please watch this video and those that follow, which are from week 5 of the series 13 Centuries of Islamic History.

A note on the 'occidentalism' label:

Insha'Allah, this will be a label for blog posts (including book reviews) that examine and scrutinise western (i.e. European and American) civilisation and culture and compare it to Islamic civilisation, and with Allah alone is every success!
Posted by Mahdi Lock at 23:20

Email ThisBlogThis!Share to TwitterShare to FacebookShare to Pinterest
Labels: Occidentalism

Ya sidi Hamza Yusuf had mentioned this bit regarding the celebration of life. I find such interesting indeed, considering the fact that we divorce ourselves from the mundane in seeking a higher virtue.

The irony in all this, of course, is that though Nietzsche claimed that his recommended path would lead to good mental health, he spent the last ten years of his life suffering from serious mental illness from which he never recovered! Does this not suggest that the man himself did not know and understand the path to good mental health?

Aspects of Nietzsche's thought were embraced by the Nazis and the Italian Fascists, partly due to the encouragement of Elisabeth Förster-Nietzsche through her connections with Adolf Hitler and Benito Mussolini. It proved possible for the Nazi interpreters to assemble, albeit quite selectively, certain passages from Nietzsche's writings which could be employed to justify war, aggression and domination for the sake of nationalistic and even racial self-glorification.

This is a man not worth quoting, in my humble opinion.

1: His mental illness was pathological, not psychological. 2: What is wrong with atheism? Only a Christian or a muslim see a problem with it. 3: That he was misinterpreted by ideological political movements is no argument against the value of his views. 4: This man is well worth quoting but not all have the capacity to grasp his unparallelled genius.

Nietzsche said that those serious about Christianity are "favorably inclined toward me." I am a Christian and respect and even agree with many (not all!) of his opinions because I understand what he is really saying - most people do not. Nietzsche must be read slowly, over and over again and again to be truly understood.