Madness is Rare in Individuals 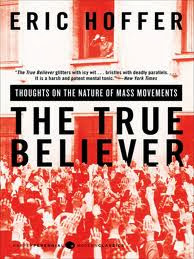 Blurb: A stevedore on the San Francisco docks in the 1940s, Eric Hoffer wrote philosophical treatises in his spare time while living in the railroad yards. The True Believer –the first and most famous of his books – became a bestseller when President Eisenhower cited it during one of the earliest televised press conferences. Completely relevant and essential for understanding the world today, The True Believer is a visionary, provocative look into the mind of the fanatic and a penetrating study of how an individual becomes one.

The author: Eric Hoffer (1902-1983) was self-educated and lived the life of a drifter through the 1930s. After Pearl Harbor, he worked as a longshoreman in San Francisco for twenty-five years. He is the author of ten books, including The Passionate State of Mind, The Ordeal of Change, and The Temper of Our Time. He was awarded the Presidential Medal of Freedom in 1983 and died later that year.

This book first came to my attention in 2010, after the failed IPCC summit on climate change in Copenhagen in December 2009, followed by the “climategate” emails of the preceding months, had all of a sudden cast doubt on what was arguably the most significant mass movement of the age. The scare was not quite what is had been hyped up to be, but certain people, even to this day, still cling doggedly to the belief that the world is warming up and mankind is primarily to blame, especially through our emission of carbon dioxide. Back in 2010, I noticed that such people were being labelled as “true believers”, and the purport was that such people’s faith never wavered in the slightest, regardless of the ever-emerging cracks or even overwhelming evidence that what they had called for and advocated no longer held up under scrutiny.  For further details, one had to read Eric Hoffer’s book, which was first published in 1951.

In previous blog posts, it has been pointed out the truth is not something that everyone is sincerely seeking, and the proof is that the majority of humanity lives and dies upon other than Islam. Therefore, demonstrating that something is undoubtedly true is not always enough to convince someone, because it is not minds and intellects that are diseased; it is hearts. Furthermore, this book was first mentioned on this blog in relation to a post about the religiosity of the AGW movement, and the lady who appears in the debate with Viscount Monckton would fit the description of the “true believer” perfectly. Again, one can see that the truth is not the primary motivator.